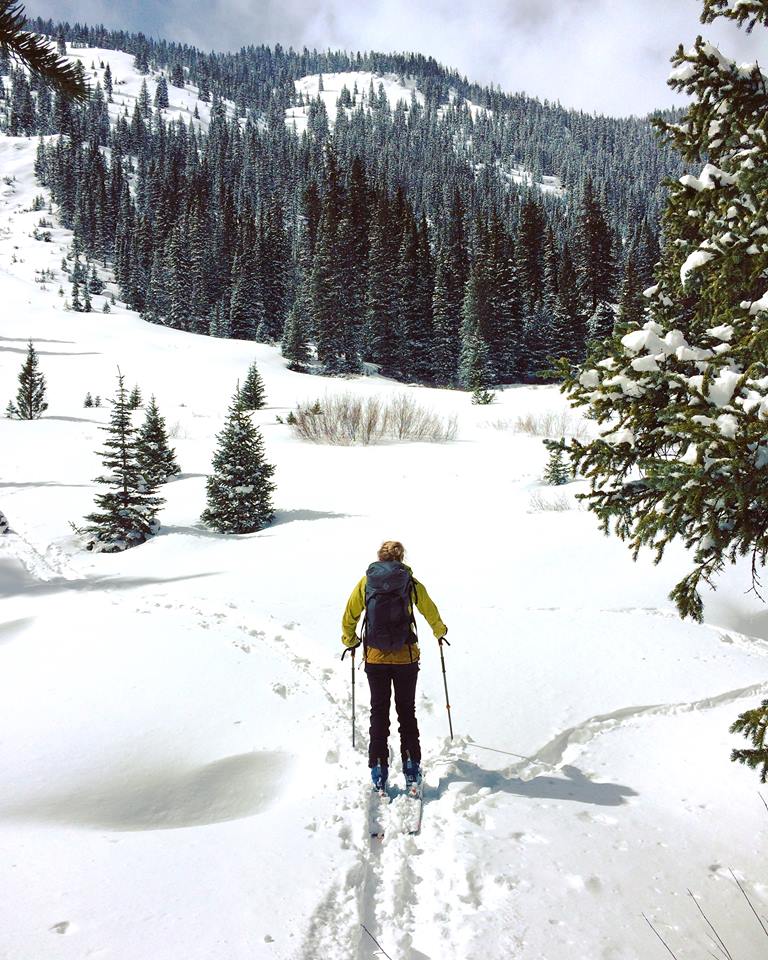 There are days in the backcountry that are defined by blue skies, plenty of vertical, and a few solid face shots. There are other days that look more like this photo: 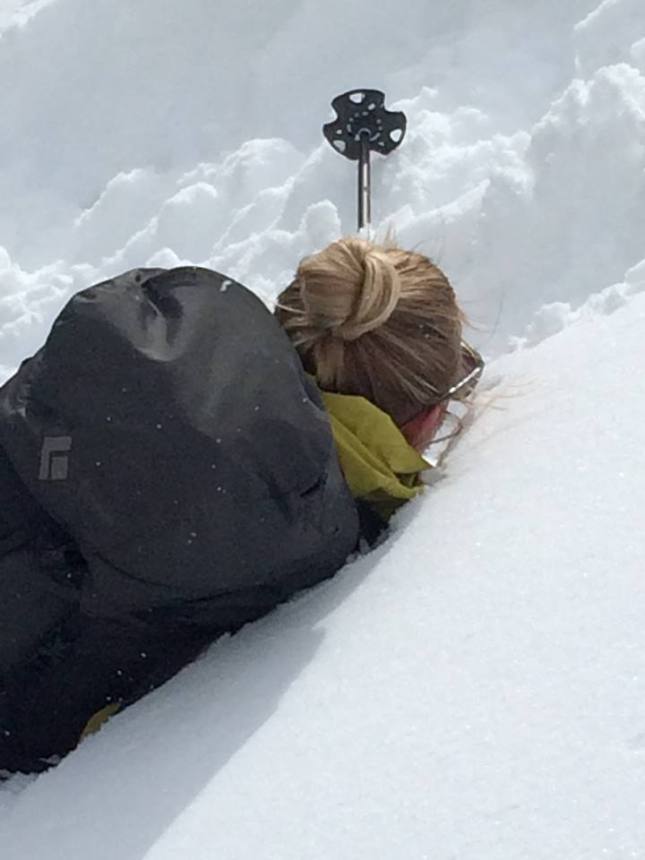 Post-holing into waist-deep snow after tipping over and ejecting from your binding, only to realize that after assessing the snowpack further, what your leg had plunged into was several inches of fresh snow on top of a semi-faceted slush slab with more weak layers underneath. And so you turn around, ski a super sick 50-feet of vertical, and skin back to the car.

It was one of those days where things didn’t get rolling until way too late in the day for any sort of real mountain mission to be accomplished. I had to go to Buena Vista to pick up my skis and boots, and Jo couldn’t get to Breck to bring them to me due to unexpected car problems. I was going to drive down the night before so we could get somewhere close to an alpine start and accomplish some actual vertical for the day. Instead, a massive snow storm rolled in and kept me from making the drive over a couple of hairy mountain passes to get from my little cabin outside of Breckenridge over to Buena Vista at 9 at night. So I made a new goal of leaving the house at sunrise so as to get there with enough time remaining for a big tour day. When that didn’t happen, I rolled out of bed at 7am, realized I had to shovel the driveway, poured some coffee into my dented stainless steel mug with peeling stickers, and was out the door around 8:30. I made it to Jo’s house, we chatted, picked up my skis, and then got caught up at a gear shop looking at topographic maps while eating buffalo ravioli and pretzel bread (which is, by the way, one of the most delicious things in this world). At 12:30 we finally hopped in the car and ditched town to head up Independence Pass. It was probably 1:15 by the time we were finally taping skins to the bases of our skis and stepping into our bindings.

The tour certainly wasn’t anything to brag about, but it was a great day. The more I ski–especially in the backcountry–the more I realize the primary goal of it all: just getting out there. There are days when I spend hours on a long tour and get some great turns in, and there are others when I go for a 45min skin on a trail, just to get the dog and myself some exercise. Either way, I’m out in the mountains enjoying myself. No matter how long or short the day is, I always come back happy that I got out there. 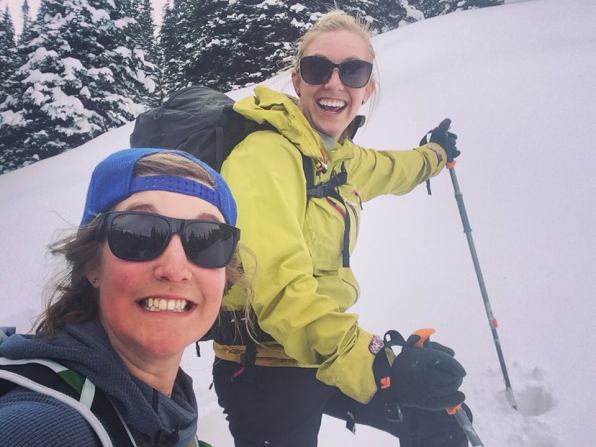 It’s easy to get that feeling of it’s not worth doing unless I can do it awesomely. But do we do things to be awesome or do we do them to feel awesome? Because there’s definitely a difference. Do we do things so we can #earnyourturns on Instagram and brag to our friends about it? Or do we do it simply for the love of being in the mountains?

The joy of being outside is sometimes stifled by the need to summit, or do something extra gnarly, or get the cool shot to show that you’re a real skier or outdoors-person. If I’m trying to get in as many miles or as much vertical as possible, I forget to look up–admire the glow of morning light in the alpine or the snow-covered trees and their mellow dance in the wind. 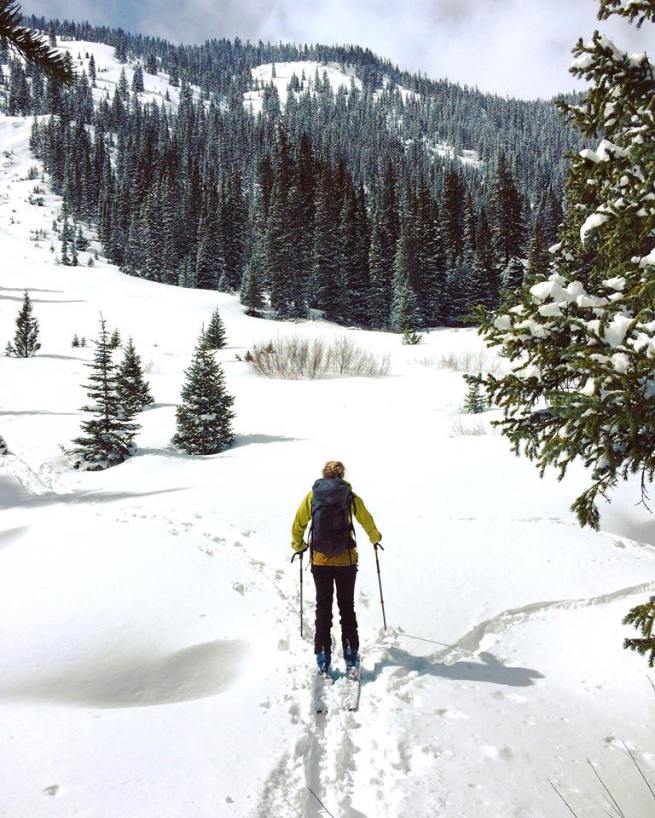 The other night my boyfriend and I took the dog out for a nighttime skin up the trail by our house. I didn’t even take my skins off, seeing as the route is more or less flat. We were out there for about an hour, and I think at least a third of that time consisted of me just staring up at the stars on a perfectly clear night. It wasn’t an epic adventure that included a summit and a ski “descent,” and I didn’t #earnmyturns because there weren’t really any turns to be had. But it was awesome, not because we did anything noteworthy, but because peeking up at the universe  with skis under your feet is awesome.

And post-holing is awesome, too, if you’re doing it with good friends in the mountains. Ok, maybe post-holing still isn’t awesome. But sliding around on skis in new territory is–even if you only get 5 turns in. A day out there in this big, awesome world is a day out there, whether you’re ski-mountaineering or taking the dog out for a quick jaunt on the trail. No one ever said, “Man, I wish I hadn’t gone out to play in the mountains today.”